Posted at 06:13h in The Tech Savvy Musician by rebecca 0 Comments
0 Likes
Share 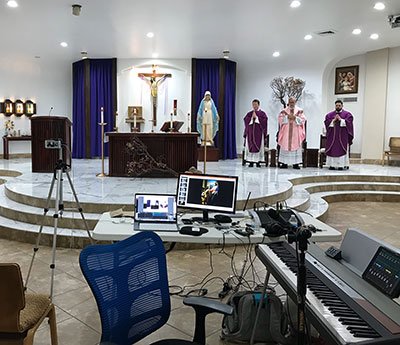 A little background story to how this came about…

I have many jobs and one of them is being the music director at a church that holds eight masses every weekend (4 English, 3 Spanish, and 1 Vietnamese). Right after our bishop announced on Monday, March 16th, 2020 that all public masses would be canceled until further notice, my pastor (who is a wonderful man but not very fond of online platforms in general) all week was saying that he didn’t want to live stream mass. He said he felt that the people could watch mass at the Cathedral and be united with the rest of the Diocese or some other such excuses. While those are all good things, the fact is that he just didn’t want to be on camera.

Regardless, I still felt in my heart that I needed to *finally* get my live stream game going strong. So I started to play around with it and research it a bit during that week – because although I know I can just use an iPhone to stream the whole thing, the audio quality is NOT acceptable in my opinion, particularly in a reverberant church. People can tolerate mediocre video but the audio needs to be good. So I started playing around with options during the week. I was pretty determined to at least stream some songs and readings and prayer from my house on Sunday for our community, and I wanted to be prepared. But it was a pretty chill thing.

However, on Saturday morning (March 21st) around 10:30a, I get a call from my Pastor asking about streaming mass. Of course I just told him yes that we can do it. And of course he asked about the audio. In our church where we have vaulted ceilings, tile flooring, and plaster walls, there is a significant amount of reverb that obscures vocal clarity. I reassured him that we will use the audio straight from the mixer in the church and it would be clear as a bell. So now I had to get this all going and ready before the 9a mass the following morning – less than 24 hours to prepare in the church. It *sure* would have been nice to have had *all week* to prepare *in the church* and get it ready like most other churches had… but I digress.

What I’m sharing here is just the way that I did it the first Sunday we had to stream masses. There are many ways and variations but this is how we got started using the equipment we already had on hand. In subsequent posts I continue to share how we are improving our streaming offering as we go – since I’ll finally have time to really iron out all the kinks!

The number one thing you need to have a successful stream is good Internet.
We have a solid 10 Mbps uplink on the private church network. I recommend you have at least 5 Mbps to reduce the number of dropped frames.

In this short video, I show you how you can reliably test your internet uplink. Basically, just go to speedtest.net and run a test on a couple different servers. Make sure you’re on the same wireless network you will be using for your live streaming.

Overview of the Equipment and Software I Used

Here are the main components you need and the ones I used (because that’s what I had on hand) – you only really need the first 5: 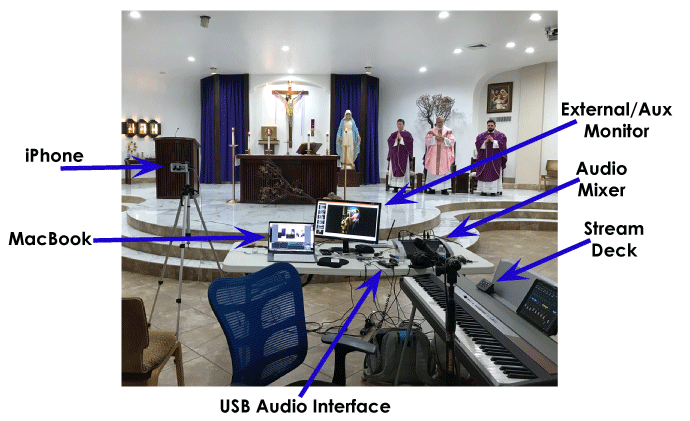 How it all works together

In this particular setup, we are only streaming live directly to the Church Facebook page. In subsequent blog posts, I will show you how we simulcasted to YouTube and Facebook (i.e. live streamed to both platforms at the same time). 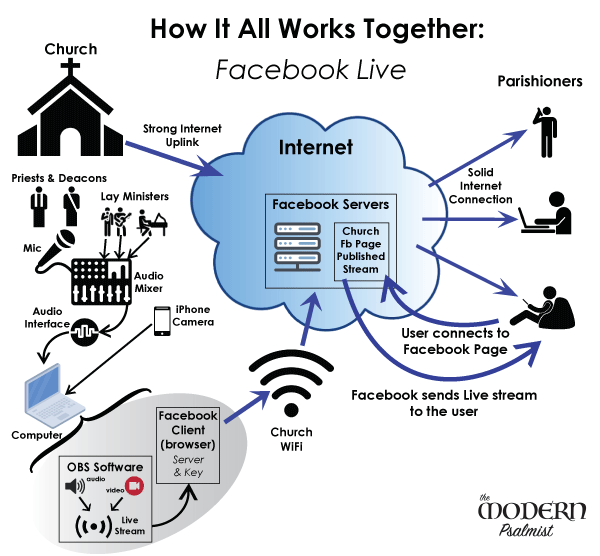 The Equipment and Software Explained In Detail

In this section I review in greater depth the equipment and software we used our first Sunday. The accompanying videos will help you gain a better understanding of how to replicate this setup yourself.

Like most churches, we already have an audio mixer that handles the mics for the priest, deacon, ambo, and vocalists/choir as well as the instruments. That audio mixer has an output that is routed to the speakers in the church. I simply took one of the outputs from the mixer and connected it to the input on my USB audio interface. All other settings on the church mixer remained the same that they do for any Sunday mass. The mixer already in your church will work fine for this purpose to deliver a clear audio signal.

Further details about audio mixing is beyond the scope of this article. 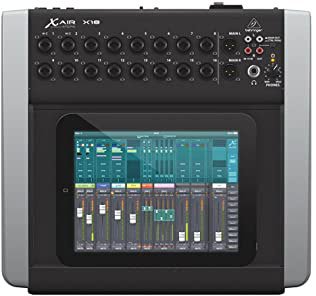 The audio from the church mixer needs to make its way into the computer so it can be combined with the video to create the live stream. This is achieved via an Analog to Digital coverter – and this is what the USB audio interface does. It takes the analog signal from the mixer and coverts it into digital waveform representations that can be manipulated/processed on a computer.

There are many good and inexpensive audio interfaces on the market. I happened to have an *old, original* Apogee ONE – it’s obsolete by today’s standards but it gets the job done. Here are several more modern interfaces that are very affordable:.

OBS (Open Broadcaster Studio) is a very popular open-source software application for compositing live streams. Best of all, it’s completely FREE. Download it here and start playing around with it!

In the adjacent video, I go over setting up and configuring OBS from scratch to live stream directly to Facebook. I assume you have already downloaded the software and installed it on your computer.

We used an iPhone 8 as our external camera. You can use an Android camera or USB web cam in the same way.

Since I used an iPhone, I had to install the OBS Camera app on my iPhone (it cost only $15.99 from the AppStore). I *also* had to install an additional driver in OBS for it to recognise the camera as a video source, which you can download for Mac here and Windows here, and run the installer.

At this point I am assuming that both the OBS iOS driver software is installed on your computer and the OBS Camera app is installed on the iPhone. It is also assumed that the iPhone is connected directly to the computer via a lightning to USB-C cable.

With these requirements/assumptions satisfied, the adjacent video describes the process for confiuging the iOS camera as a video source for OBS Studio.

At this point I’ve reviewed all the important parts of the setup so you can begin to live stream on your own. But I highly recommend that you use the Recording option in OBS to do a test run and verify that your audio and video quality are what you want. You can also just run a test stream on your parish Facebook page. We did both.

One more note: OBS encodes broadcast streams which are not readable by your standard video players. You’ll need to “Remux” your recordings, and OBS can handle this for you. Simply select File -> Remux Recordings and locate the recording you want to convert to mp4.

That’s a wrap for this tutorial. However, our streaming setup is continually evolving and I’ll be sharing the updates here on on the Worship Technology blog as we go along. Be sure to sign up here to receive email notifications of and new articles and updates.

Also, feel free to comment below if you have any questions about our setup or if you would like further clarification. God bless you and your ministry, and stay safe and healthy!